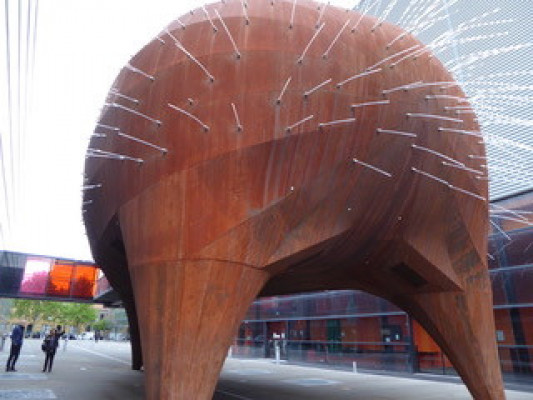 After almost three years, it was good to be able to join Diane Burstein for another City Walk, this time for the twice cancelled tour of Whitechapel on Tuesday 10 May 2022. Sadly the numbers were not up to our usual standard, but the five of us, who accompanied her, thoroughly enjoyed her usual knowledgeable guidance around what turned out to be a fascinating locale.

We met outside Whitechapel Station, proceeding from there past a huge street market, now mainly run by Bangladeshies, as the latest wave of immigrants to an area renowned for welcoming them and providing the background for development.

Our next stop was a pub that was the haunt of the Kray Twins, followed by Trinity Green, a beautifully maintained set of what originally were almshouses for retired Trinity House pilots. Further along the street was the base from where William Booth joined the Mission which became the Salvation Army, with an amazing mural commissioned by a local solicitor for the 2012 Olympics, when the marathon was to pass that way.

One of the re-developments is to become the Tower Hamlets Town Hall, leaving the facade of what was The London Hospital. Nearby is the current site of the Royal London Hospital, which has been redeveloped and climbing to the sky, with a helipad on top (it is part of the Barts Trust and since Barts does not have an A&E department, patients are flown in from the City). A statue of Queen Alexandra is positioned outside – she funded a new means of treatment for Lupus called the Finsen Light, although it proved not to be very successful.

Other interesting features were the childhood home of Jack Cohen, who founded Tesco; an enormous porcupine-like structure representing a neuron nerve cell, which turned out to be a classroom for schoolchildren visiting the Blizard Laboratory; a former hostel for single men, with individual cabins (room for a bed and a chair, but walls not reaching the ceiling, so if you found your neighbour’s clothes were better than yours, you could lift them with a fishing rod!); Tayyabs, the best Punjabi food in London; and the Whitechapel Art Gallery. The Bell Foundry has now closed and is likely to become a hotel.

We completed the evening with supper at The Hoop and Grapes opposite Aldgate Station.